To find out more, you can also visit Tara's blog 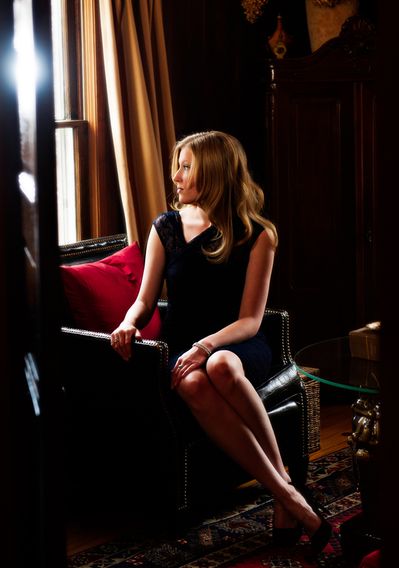 A fellow musician stated years ago that Tara Hawley is "fast becoming a stylist," for her singing evokes the spirit and sweet familiarity of the old in a new and refreshing style all her own. DJs are calling Tara "a dynamic singer," "definitely a star on the musical horizon" because they agree that she has something special—the vital ability to communicate the emotion of a song, along with the voice, pitch, and quality to back it up. For that reason, she has been compared with the likes of leading jazz and contemporary singers such as Ella Fitzgerald, Maureen McGovern, and Karen Carpenter.

Entertaining audiences with her smooth vocals and beautiful song interpretations, Tara has headlined at venues such as Nighttown, BLUJazz+, Cain Park, and the Stocker Arts Center in Northeast Ohio. In addition, she has the privilege of appearing as a guest vocalist on fellow musicians' recordings and performing as a featured soloist with the area's top talent—from jazz trios to full orchestras—singing jazz, pop, and various other styles. Tara is an accomplished piano teacher and vocal coach as well as being a performer and has worked as a model, film extra, and studio vocalist, lending her voice to jingles and demos.

Also a songwriter and arranger, Tara released her first original-song album, Stay Awhile, recorded at Crushtone Studios in Cleveland, Ohio. The album was produced by Jim Wirt, who is known for his work with platinum-selling artists such as Fiona Apple and Hoobastank. Her songs tell stories from her own life — stories of love’s loss and triumphs, every day struggles, and the dreams of what things are yet to be.

Most recently, she is collaborating with songwriter/producer Allan Licht and Grammy-Award-winning producer/keyboardist Pete Tokar in releasing new original singles, available on all major digital & streaming platforms.

"But when I hear music...I see fresh beauties and delights opening up before me one after another.  I run behind them, catch them, savor them, but still more come before I can absorb them, quite like the waves of the sea that come on endlessly and forever."

~From Quo Vadis by Henryk Sienkiewicz 1905

Recorded with producer Jim Wirt (known for his work w/ platinum selling artists such as Fiona Apple and Hoobastank), Tara Hawley’s long-anticipated, original-song album Stay Awhile brings a breath of fresh air to the modern pop scene. Infused with jazz, rock, and soul, Tara’s melodic, poetic tunes (all written or co-written by Tara) don’t fall slave to current pop trends but carve out their own niche.

The first single “Ready to Give You Love" is full of trumpets, jazzy rhythms, and tight harmonies, giving listeners a glimpse of her debut record. The song—inspired by her love of jazz and the classic pop songs of the late 60’s and early 70’s—captures a vintage, upbeat vibe with a fresh twist.

Filled with deep lyrics that don’t feel heavy and catchy hooks that will keep you coming back for more, this album is another great example that traditionally crafted music can still be mainstream. Grand piano, trumpets, cello, acoustic bass, guitars, and more make these songs come to life. Giving nods to previous decades in style and delivery, Stay Awhile remains classic and refined while creating fresh vistas for its listeners. And, not least of all, Tara’s smooth, sultry vocals will quickly capture your attention as her interpretations draw you in – the perfect complement to this original material.

“I’ve always been especially drawn to lyrical, melodic songs,” says Tara, “that, even if they are upbeat and fun, have a story to tell … I’ve also been so inspired by performers who are also great interpreters and can make you feel a song. It’s always the best compliment I can receive: that someone felt something deeply as they listened to one of my songs or performances. Great art is really about communication and baring a little of our souls, whether we are in the role of artist or audience. It celebrates the moments of beauty and vulnerability that connect us all. I'm so excited to have you to share in a little bit of my story, and I hope it helps you feel that you're not alone in this fantastic, crazy journey called life.”